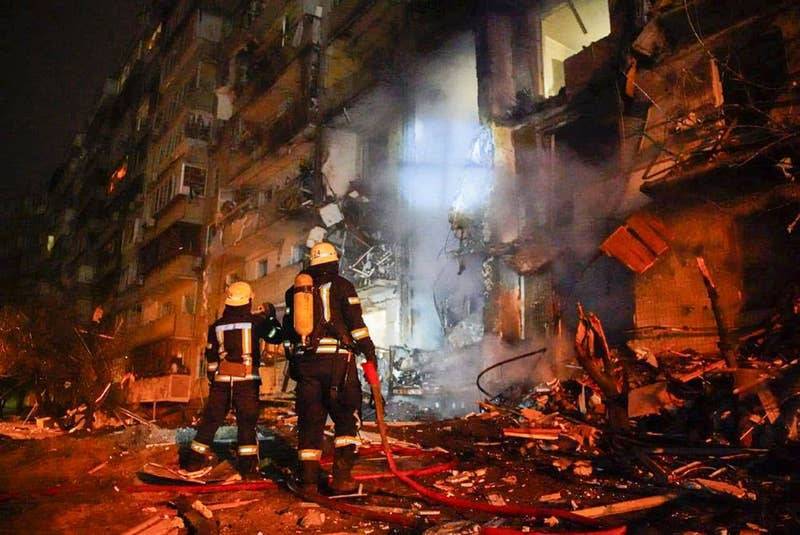 An image from Ukrainian Police Department Press Service released on Friday, shows firefighters inspecting the damage at a building following a rocket attack on the city of Kyiv. To read the full story, click here.

On Wednesday, the European Union officially released the names of the Russian banks the bloc was cutting off from SWIFT.

To read the full announcement in the Official Journal of the European Union, click here.

The EU stated It “shall be prohibited” as of March 12 to provide specialized financial messaging services, which are used to exchange financial data, to the legal persons, entities or bodies listed related to the listed Russian banks or to any legal person, entity or body established in Russia whose proprietary rights are directly or indirectly owned for more than 50 percent by any of the listed entities. 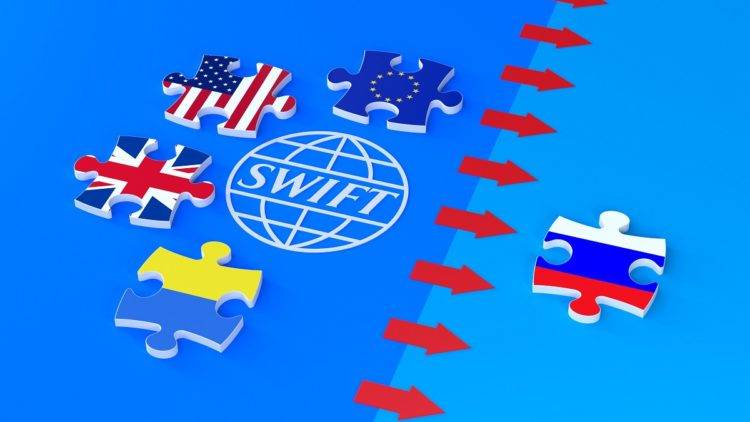 Russia’s invasion of the Ukraine on Thursday, ostensibly to prevent further NATO expansion on the country’s doorstep, has caused the opposite – with allies across the globe banding together in a way once thought nigh impossible.

The United States, United Kingdom, Canada, the European Union and others, after first showing a reticence, finally unsheathed what many called the “nuclear option” for sanctions against Russia: removing a yet unnamed “select” number of Russian financial institutions from a trusted and widely-used global financial messaging platform.

The Society for Worldwide Interbank Financial Telecommunication, or SWIFT is considered the financial communication backbone of the bulk of the international financial system.

More than 11,000 financial institutions globally use the system to send secure messages about financial transactions.

But for some Russian banks, that is expected to change.

“Russia’s war represents an assault on fundamental international rules and norms that have prevailed since the Second World War, which we are committed to defending,” the coalition said in a joint statement. “We will hold Russia to account and collectively ensure that this war is a strategic failure for Putin.”

To counter any disconnections from SWIFT, Russia could try to shift and move more assets through non-blacklisted banks.

Such a move would put more pressure on U.S. and international banks with expansive correspondent networks to see who they are connected with and how – and ensure no Russian bank, blacklisted or not, is using a correspondent relationship to access the global financial system in a secret “nested” scenario.

In tandem, while a large international bank is not technically responsible for anti-money laundering (AML) risk scoring, transaction monitoring and suspicious activity report (SAR) filing for their customer’s customers – such as the risk of individuals and businesses at a foreign correspondent bank – the institution is responsible for asking about compliance controls and key details about customer segments.

For example, a large global bank with a girthy foreign correspondent network could consider doing a Russian-focused mini look-back to get a fresh perspective on if those populations have changed in any of their correspondent bank connections – particularly in regions with strong connections to Russia.

Some questions a large bank could get from its correspondent connections include:

Where Russia is moving and hiding its money is also on the minds of U.S. officials and their international cohort.

In addition, the group also restricted the Russian Central Banks’ access to most of its reserves – more than $640 billion in foreign currency – making it harder for Russia to blunt the blow of sanctions with its far-flung financial treasure hoards.

The goal of the task force is to “collectively hunt down the physical assets of sanctioned Russian companies and oligarchs — their yachts, jets, fancy cars, and luxury homes,” according to a senior administration official on a background call Saturday with reporters.

To read the full transcript of the call, click here.

The “severe” sanctions by the U.S. and its commitment by a coalition of partners over roughly the last week have resulted in a bevy of financial crime compliance, sanctions and cybersecurity risks to soar.

With the financial sanctions announced Thursday and prior first tranche released on Tuesday, “we have now targeted all ten of Russia’s largest financial institutions,” the administration stated.

Sanctions Compliance Resource Snapshot: A Checklist to test your screening filters to ensure you are not missing anything

Courtesy of Crystal Noe, head of Noe Compliance, who has more than two decades of experience in AML, sanctions and risk management roles, most recently holding top sanctions compliance posts at FaceBook and Citi.

Want to see some of her videos on sanctions or chat with Crystal, feel free to reach out here. 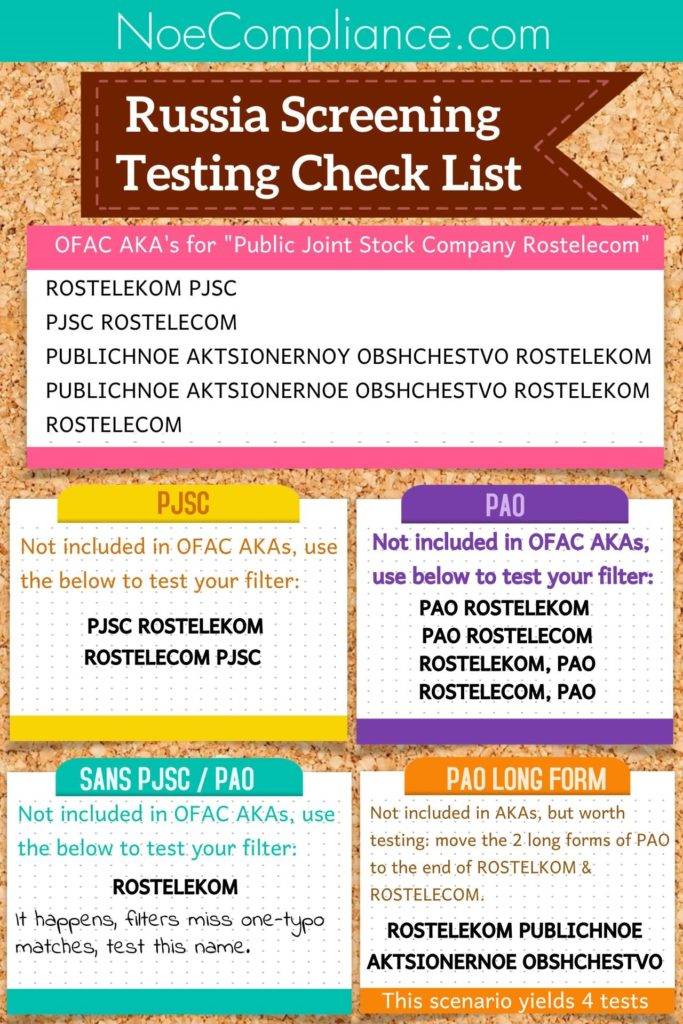 Even with behind-the-scenes divisions, allies able to unite on SWIFT strategy

But for many sanctions hawks, one of the most powerful sanctions hammers in the tool chest was threatening – and now even pulling the necessary political, regulatory and legal levers – to severing some or all Russian banks from SWIFT.

To understand that, you need to know what SWIFT is and what it does.

SWIFT is not a bank itself. It is a member-owned cooperative that provides safe and secure financial transaction messaging for its members, according to Investopedia.

This payment messaging network allows individuals and businesses to “take electronic or card payments even if the customer or vendor uses a different bank than the payee. SWIFT works by assigning each member institution a unique ID code that identifies not only the bank name but country, city, and branch.”

Hence, taking that away from a given bank would essentially usher it back into the Dark Ages.

“The reason de-SWIFTing is severe is that this is a network that almost all banks in the world use to transmit financial information to each other as they make payments or receive payments,” according to the administration official.

“The SWIFT code is on the bottom of every check you sign,” the person said.

“If one of these de-SWIFTed Russian banks wants to make or receive a payment with a bank outside of Russia, such as a bank in Asia, it will now need to use the telephone or a fax machine,” the official said.

“In all likelihood, most banks around the world will simply stop transacting altogether with Russian banks that are removed from SWIFT.”

But getting to that point still has hurdles.

Many large EU member states, including the economic engine of the bloc, needed some convincing to jump on board with SWIFT sanctions – and still may not agree to full, country-wide bans.

“Germany and Italy had been reluctant to include SWIFT as part of sanctions against Russia,” according to media reports.

“Europe’s economy, which is far more closely tied to Russia’s than the U.S. economy, could suffer if Russia was restricted or prohibited from using SWIFT, including if banks are blocked from access.”

But the “mood on this in Europe has been shifting as Russia’s aggression has escalated,” according to the report. “On Saturday, Germany’s government indicated publicly it might support restricting or limiting Russia’s access to SWIFT in a targeted way, short of a total removal.”

But even finding a connection at all to the international financial system is getting increasingly difficult for Russia, as sanctions to the country’s leaders, banks and sectors have soared into the thousands.

In all, in just a matter of days – particularly after Russia started ground operations in Ukraine on Thursday – the number of sanctions issued by the U.S. and its allies exploded, according to fincrime technology firm Castellum.AI.

The U.S., EU., Australia, Canada, Japan, Singapore and – shedding decades of neutrality – Switzerland, imposed more than 2,200 new sanctions against Russian politicians, oligarchs, banks and energy and defense firms since February 22, bringing the total of Russia-focused sanctions to more than 4,000.

“Russia is now more sanctioned than North Korea,” the firm stated in an infographic charting the mushrooming complexity of the sanctions landscape.

The U.S. and its allies also addressed a longstanding gap that allowed rich Russians to have easy entre into the international financial system – simply by not making them wholly Russian anymore.

“Specifically, we commit to taking measures to limit the sale of citizenship — so called golden passports — that let wealthy Russians connected to the Russian government become citizens of our countries and gain access to our financial systems,” the statement said.

While not all specifically named “Golden Passports,” the idea is the same.

These are programs in the U.S., EU and other countries that will grant citizenship to foreign individuals, business leaders and wealthy, politically-connected power brokers who make investments of a given, predetermined financial figure in that jurisdiction.

“Governments contend that the granting of passports helps the local economy by bringing in investment, but the programs have often been criticized as a way for wealthy people to buy citizenship,” according to analysis and commentary from Business Insider. 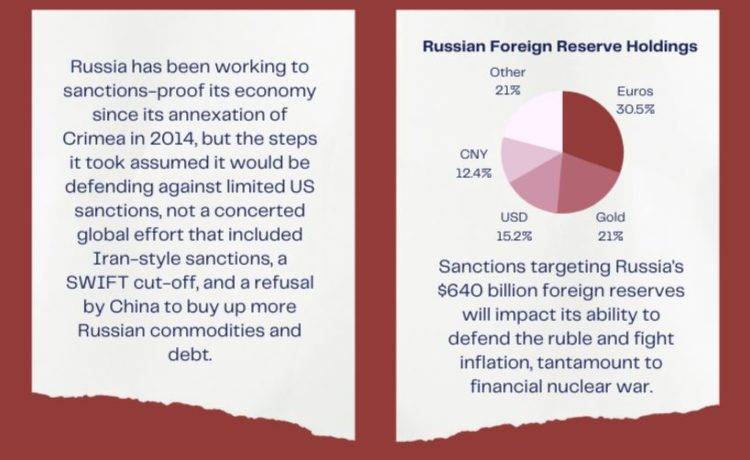 With historic, herculean sanctions barrage, world wonders: Is it working?

So, with so much effort to sanctions Russia, that begs the question: has it made a difference?

Will it make Putin concede to slow, halt or even retreat?

On Monday, Russia’s ruble plunged by 30 percent against the US dollar, to a record low, according to the report.

Kremlin spokesperson Dmitry Peskov admitted Monday that Russia’s “economic reality” had “considerably changed” in the face of the “heavy” and “problematic” Western sanctions – while still stating Russia can weather them.

Rabobank warned the sanctions could prompt “perhaps the worst economic and financial collapse” in Russia since 1991, according to BI.

Mark Haefele, chief investment officer at UBS Global Wealth Management, said in a note to clients: “Concerns are surfacing about larger-scale bank runs,” according to the report.

Those fears led to Russia’s central bank Monday more than doubling its base interest rate to 20 percent because “higher rates support a collapsing currency,” according to the BI report.

But hiking rates so high so quickly is “likely to make life “more expensive for Russians by pushing up the cost of debt, and in time, the price of food and other goods. A higher cost of living could erode limited public support for war in Ukraine.”