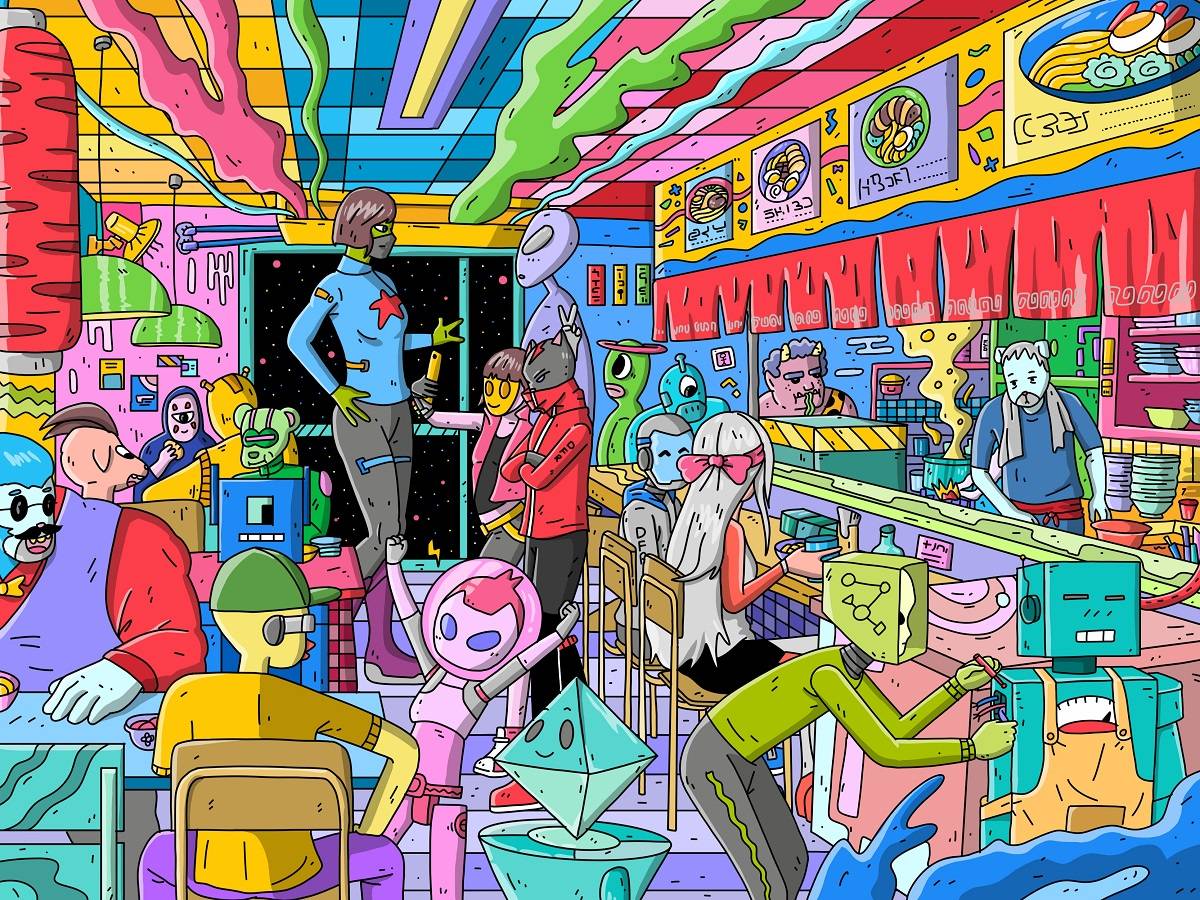 This NFT, titled “Spectrum of Ramenification,” was one of the alleged digital assets used by a former OpenSea employee in a historic insider trading case

In our latest installment of the series, some of the sharpest minds in the fields of financial crime compliance, crypto data analytics, investigations and enforcement hold court in a seminal case that could give more concrete shape and legal boundaries to the ethereal and intangible world of digital asset trading: NFTs.
Ari Redbord, Luke Raven and Jim Richards offer their analysis and perspectives on the case and the broader sector of NFTs, or non-fungible tokens. These seemingly basic, silly and cartoony pictures of “bored apes” and other illustrations have been created, sold or “traded” for eye-popping figures – with corresponding collections in the millions of dollars, ironically enough, later becoming the target of hacking groups.
In the “age old” scheme, Nate Chastain, then head of product at leading NFT marketplace, OpenSea, used his knowledge of confidential information to purchase dozens of NFTs in advance of them being featured on OpenSea’s homepage – a move to circumvent the anonymity associated with NFT first appearances.

In our latest installment of the series, some of the sharpest minds in the fields of financial crime compliance, crypto data analytics, investigations and enforcement hold court in a seminal case that could give more concrete shape and legal boundaries to the ethereal and intangible world of digital asset trading: NFTs.

Those three letters have become nearly as ubiquitous as crypto coins, de-fi and virtual exchanges as seemingly basic, silly and cartoony pictures of “bored apes” have been created, sold or “traded” for eye-popping figures – with corresponding collections in the millions of dollars, ironically enough, later becoming the target of hacking groups.

In the “age old” scheme, Nate Chastain, then head of product at leading NFT marketplace, OpenSea, used his knowledge of confidential information to purchase dozens of NFTs in advance of them being featured on OpenSea’s homepage – a move to circumvent the anonymity associated with NFTs appearing on the homepage.

“With the emergence of any new investment tool, such as blockchain supported non-fungible tokens, there are those who will exploit vulnerabilities for their own gain,” said FBI Assistant Director-in-Charge Michael J. Driscoll, in a statement.

The indictment has a great explainer section on NFTs: https://lnkd.in/gDKNQS28

Check out the full release: https://lnkd.in/ge8qk2Ns

The Treasury defines NFTs as “digital units on an underlying blockchain that can represent ownership of a digital work of art.”

What does the future hold for the NFT sector, including art creators, sellers and marketplaces, when it comes to financial crime compliance duties or counter-fraud expectations?

That is an unknown because, depending on how these entities buy and sell NFTs, they could be acting as a quasi-crypto exchange, thus tripping global recommendations and regional fincrime compliance rules, according to the U.S. Treasury.

Virtual asset service providers (VASPs), including crypto currency exchanges, in the U.S. and many other countries are already subject to AML rules.

But NFTs seem to straddle the line between the crypto world, the art world, the securities sector and the realm of traditional banking and finance.

These digital trading cards – so whimsical in some instances it can be hard to see them as illicit funding portals – do not neatly fit into a sector category so that banks, regulators and jurisdictions know how to classify them and quantify them for fraud and money laundering risks, rules and restraints.

Here is what several posters had to say about this case:

Prior to joining TRM, he was the Senior Advisor to the Deputy Secretary and the Undersecretary for Terrorism and Financial Intelligence at the United States Treasury. To read his original posting and be part of the conversation, click here.

Today, the U.S. Department of Justice announced criminal charges against an ex-OpenSea employee for engaging in insider trading.

Specifically, Nathanial Chastain, the former employee of the largest NFT marketplace, was charged with wire fraud and money laundering in connection with a scheme to commit insider trading in #NFTs by using confidential information about what NFTs were going to be featured on OpenSea’s homepage for his personal financial gain.

Authorities arrested him this morning in New York and he will be presented today in the United States District Court for the Southern District of New York.

As alleged in the Indictment unsealed today in Manhattan federal court:

As part of his employment, Chastain was responsible for selecting NFTs to be featured on OpenSea’s homepage.

OpenSea kept confidential the identity of featured NFTs until they appeared on its homepage.

After an NFT was featured on OpenSea’s homepage, the price buyers were willing to pay for that NFT, and for other NFTs made by the same NFT creator, typically increased substantially.

From June 2021 to September 2021, he used OpenSea’s confidential business information about what NFTs were going to be featured on its homepage to secretly purchase dozens of NFTs shortly before they were featured.

After those NFTs were featured on OpenSea, Chastain sold them at profits of two- to five-times his initial purchase price.

To conceal the fraud, he conducted these purchases and sales using anonymous digital currency wallets and anonymous accounts on OpenSea.

The indictment specifically mentions the defendant taking advantage of insider information related to the “The Brawl 2 ,” “Flipping and Spinning,” and “Spectrum of Ramenfication,” NFT’s showing up on OpenSea’s homepage. 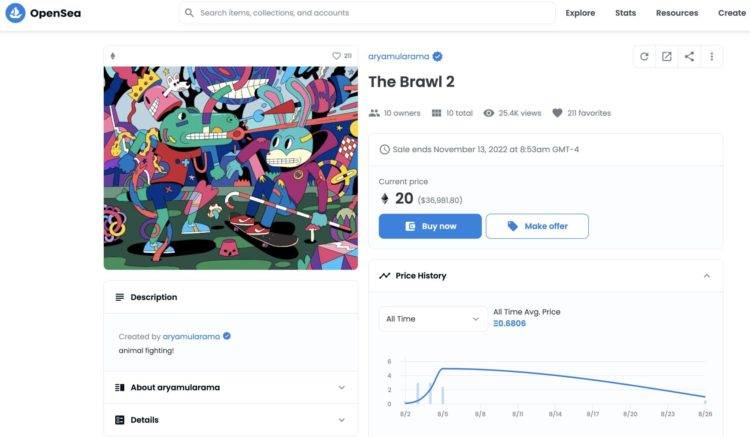 Luke Raven, the Senior AML Manager at Cabital. To see his original posting and be part of the conversation, click here.

Not a tremendous believer in #NFT’s but it’s hard not to love their transparency paying off here.

Essentially Nate Chastain, then head of product at the leading NFT marketplace OpenSea, used his knowledge of which artists and features would be promoted by his company to purchase them ahead of time.

The promotion that artists/pieces received would always see the price “pump”, so Nate’s actions amounted basically to possessing and acting on insider information, repeatedly. It’s wonderful to see the DOJ bringing fraud and money laundering charges in this case, but my FAVOURITE aspect here is how it came to light.

It was picked up and reported by the self-styled “internet detective” who goes by the handle CoffeeZilla. He ran a feature on this whole sordid affair 8 months ago that I’ll link in the comments and is well worth a watch.

Another amazing thing, on a long list of entertaining parts here, is that Nate Chastain was called out on Twitter for his conduct and initially responded with “I just wanted to secure one of these before they all disappeared tbh.”

Apparently Nate forgot, when telling this furphy, that evidence of the fact he was selling the NFT’s was recorded immutably on the blockchain.

3rd and final thing to note, perhaps as a “dessert” or finale – in March this year, CoinDesk revealed that Nate had moved on to another NFT project called “Oval” – ostensibly aimed at helping people “discover NFT’s”.

The project website still lists a “join waitlist” option if you care to subscribe, which I definitely have. At this stage if their product isn’t a single email saying “get insider info from a leading NFT platform,” I’ll be very disappointed.

Jim Richards, the Principal and Founder of RegTech Consulting and former head of AML at Wells Fargo. To read his original post and be part of the conversation, click here.

“First Ever Digital Asset Insider Trading Scheme” touts the headline from the US Attorney in Manhattan – https://lnkd.in/g8ShbQRC

There will be lots of attention on how Nathanial “Nate” Chastain decided which NFTs would be featured on the OpenSea home page, how he would not-so-secretly buy a few of them beforehand, then after they were posted and went up in value 2x to 5x, he’d not-so-secretly sell them and pocket the difference.

Here’s my not-so-obvious observations on this case:

The indictment alleges that Nate ran his scheme from June through September 2021, buying up 45 NFTs on 11 occasions.

On September 14th Nate allegedly bought up some “Spectrum of Ramenfication Theory” NFTs, then sold them the next day for a huge profit.

But what the indictment doesn’t mention is that Nate was outed by a Tweet on September 14th, or that the next day, OpenSea blogged that Nate had “resigned.”

So arguably it took the FBI more than 8 months for Nate to get criminally charged. Keep that in mind for the next cases: what is sitting on OpenSea (or Coinbase, or Kraken, or ____) today is a criminal indictment 8 to 12 months from now.

Nate was charged with money laundering.

But the indictment is silent about the value of the 45 NFTs and what he did with the ETH he “earned” from his insider trading scheme.

He could have made even more money – if he was patient.

Although the indictment doesn’t mention how much the NFTs were worth when he bought and sold them, it does mention three occasions:

I remain flummoxed about NFTs generally.

One of the NFTs he flipped was “Flipping and spinning,” described on OpenSea as “Image [sic] you are a weird purple bear floating through dimensional gates but you have the best 360 flip ever and you have never even played Tony Hawk pro skater, imagine no more! I got you.” WTF?

Which is not only easy to do, but is the norm, because OpenSea has no anti-money laundering obligations.

It is not a regulated institution. It’s not a commodities dealer. NFTs apparently aren’t securities.

Perhaps it’s an art dealer? Oops: Congress punted on adding art dealers to the AML/CFT regime, instead deciding to add antiquities dealers and to study whether art dealers should be added. Maybe next time …