My bloody Valentine: Romance scams in 2020 soared to record more than $300 million in losses, up 50 percent from pre-pandemic 2019: FTC 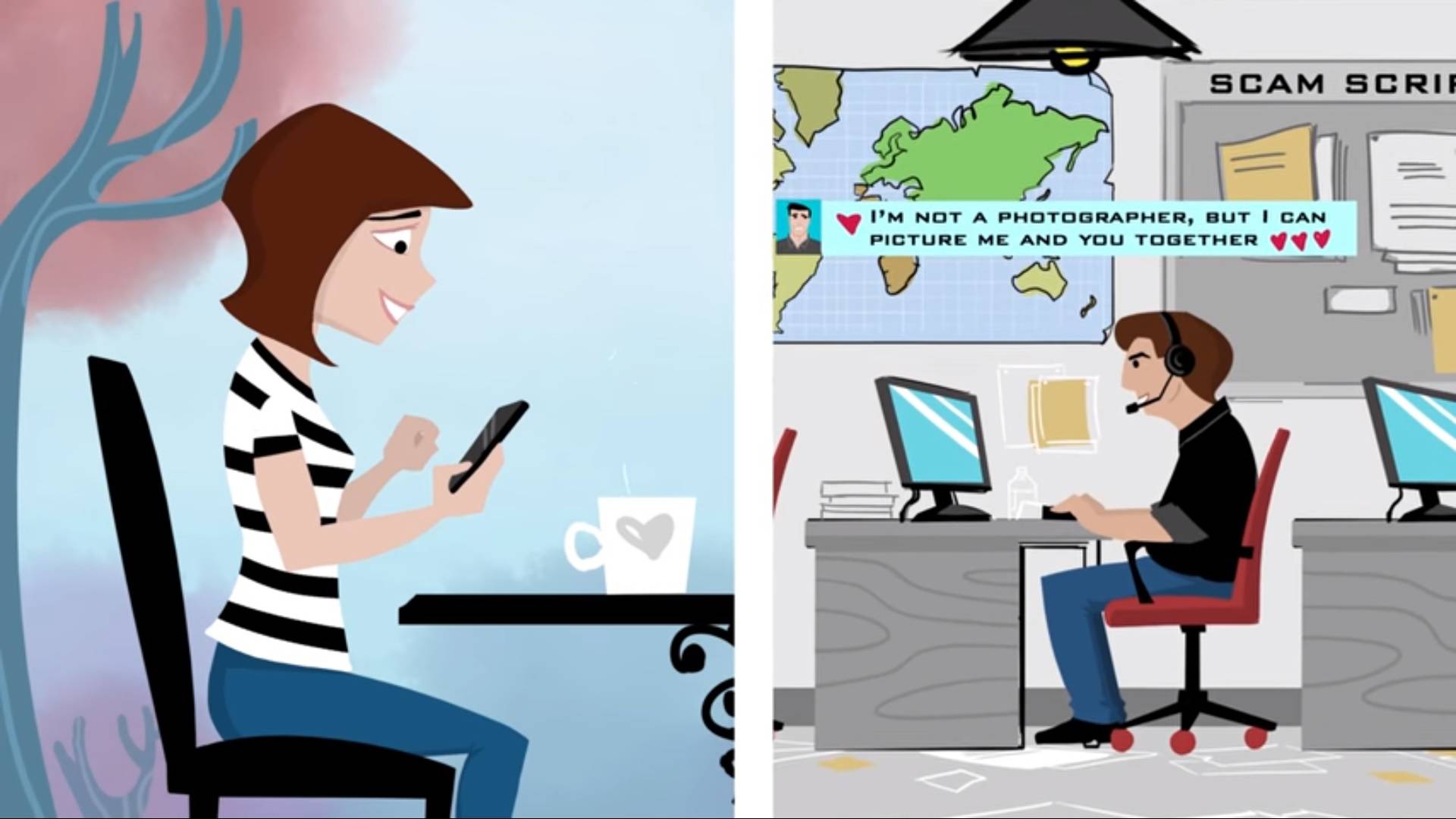 Fueled by more people working from home and missing out on genuine human contact and a jump in lonely hearts looking for love on social media and dating apps, romance scams reached a record $304 million in losses, according to just-released figures by the country’s top government commerce watchdog.

That’s a jump of about 50 percent from 2019 and a continuation of a trend where romance scams are reigning supreme as a pervasive and expensive fraud category for breaking hearts – and busting bank accounts, according to the U.S. Federal Trade Commission (FTC).

“For three years running, people have reported losing more money on romance scams than on any other fraud type,” according to an analysis of self-reported data from consumers that is stored in the FTC’s Consumer Sentinel Database.

For an individual, that meant a median dollar loss of $2,500. From 2016 to 2020, reported total dollar losses increased more than fourfold, and the number of reports nearly tripled.

The expanding illicit haul for romance fraudsters has risks for more than just victims who may have lost their life savings. Increasingly, these scams are not just callous and opportunistic individuals in Nigeria and other scam capitals.

They are part of large organized criminal networks looking to dupe desperate, lonely and out-of-work victims to be money mules and laundering tools for other crimes.

That means failing to shield victims at a bank from these scams, or not putting the pieces together, could mean a regulator finds fault with anti-money laundering (AML) program defenses and counter-fraud team responses, opening the door to examiner scrutiny and even civil lawsuits by jaded customers. 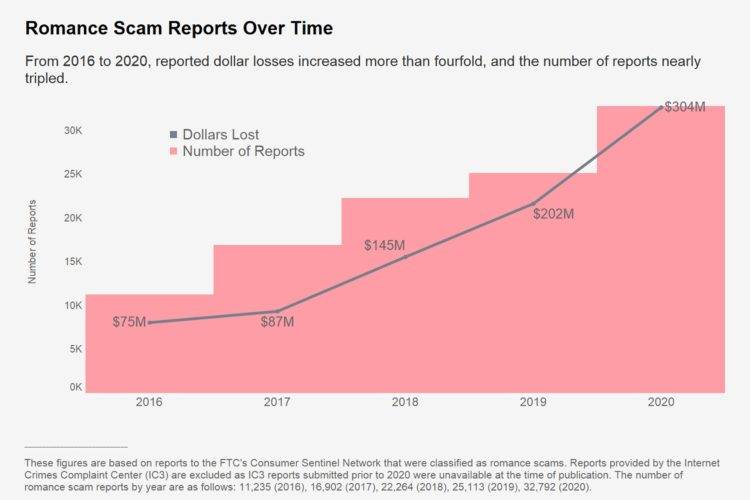 A fool – in love – and their money are easily separated

That begs the question: how are the scammers finding potential victims?

“Romance scammers create fake profiles on dating sites and apps, or contact their targets through popular social media sites like Instagram, Facebook, or Google Hangouts,” according to the commission. “The scammers strike up a relationship with their targets to build their trust, sometimes talking or chatting several times a day.”

But then comes the biggest red flag you are dealing with a scammer: after days or weeks of flowery words and protestations of deep affections comes the cleverly disguised pitch. “Then, they make up a story and ask for money.”

“While many people report losing money on romance scams that start on dating apps, even more say they were targeted on social media,” according to the FTC. “These social media users aren’t always looking for love, and report that the scam often starts with an unexpected friend request or message.”

In these stressful and emotional ploys, the scammers have an arsenal of psychological tactics to get someone to open the purse strings.

“They might say it’s for a phone card to keep chatting,” according to the FTC. “Or they might claim it’s for a medical emergency, with COVID-19 often sprinkled into their tales of woe. The stories are endless, and can create a sense of urgency that pushes people to send money over and over again.”

But ironically, at some point during the relationship, the scammers – acting as professional launderers for organized fraud or criminal syndicates – start sending money or items back to the victim to employ them as an illicit mule tool.

“What many of the largest reported dollar losses have in common is that people believe their new partner has actually sent them a large sum of money,” the FTC noted.

Scammers “claim to have sent money for a cooked-up reason, and then have a detailed story about why the money needs to be sent back to them or on to someone else,” according to interviews with victims and investigators.

People think they’re helping someone they care about, but they may “actually be laundering stolen funds.”

In fact, many reported that the “money they received and forwarded on turned out to be stolen unemployment benefits,” tied to the still-raging COVID-19 pandemic, with foreign fraudsters stealing from those already hanging by a financial thread.

Romance Scams: By the numbers

Record and heart breakers: Romance scams in 2020 soared to record more than $300 million in losses, up 50 percent from pre-pandemic 2019

Card sharks: In 2020, reports of gift cards being used to send money to romance scammers increased by nearly 70 percent.

PIN the tail on the donkey: Gift cards, along with wire transfers, are the most frequently reported payment methods for romance scams. People said they mailed the gift cards or gave the card’s PIN number to the scammer.

Romancing the phone: The median amount people sent romance scammers in 2020 using any method of payment was $2,500, more than 10 times the median loss across all other fraud types.

Younger, but not smarter: Reports of money lost on romance scams increased for every age group in 2020. People ages 20 to 29 saw the most striking increase, with the number of reports more than doubling since 2019.

Older, but not wiser: People ages 40 to 69 were once again the most likely to report losing money to romance scams. And people 70 and older reported the highest individual median losses at $9,475. 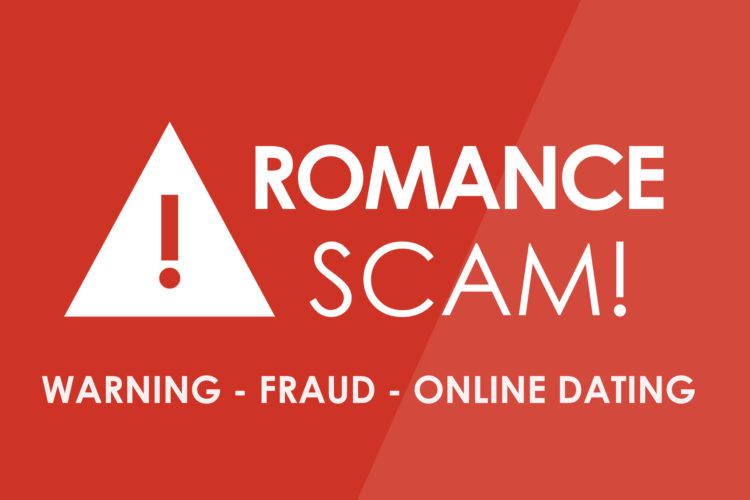 Tips to play it safe online when Cupid’s arrow seemingly takes flight: No dollars will make them holler

So how can you play it safe while looking for love online?

Here are some tips to help you steer clear of scammers:

Romance scams have “resulted in one of the highest amounts of financial losses when compared to other online crimes,” according to the FBI’s Internet Crime Complaint Center (IC3), with their analyses saying the financial frauds have breached the half-a-billion mark.

Nationwide in 2020, almost 23,768 complaints categorized as romance scams were reported to the IC3 (4,295 more than the previous year), and the losses associated with those complaints total approximately $605 million.

“Most often these romance scammers leave victims financially and emotionally devastated. Many victims may not have the ability to recover from the financial loss,” said Luis M. Quesada, special agent in charge of the FBI El Paso Division.

“While we recognize that it may be embarrassing for victims to report this type of fraud, it’s important to do so, so that the FBI and our law enforcement partners can do everything in our power to ensure these online imposters are held accountable.”