A top U.S. Treasury official stated that the world’s global counter-crime compliance body needs to shift from standard setter to international effectiveness enforcer or risks a permanent crack in the foundation of its credibility – a clear call to come down harder on rogue regimes like Iran, North Korea and others.

Those thoughts are just some of the sentiments expressed by U.S. Treasury Secretary Steven Mnuchin at the close the 2019 Orlando Plenary of the Paris-based Financial Action Task Force (FATF), a gathering that closes the U.S. Presidency and marks the 30-year anniversary of the world anti-money laundering (AML) and counter-financial crime body. 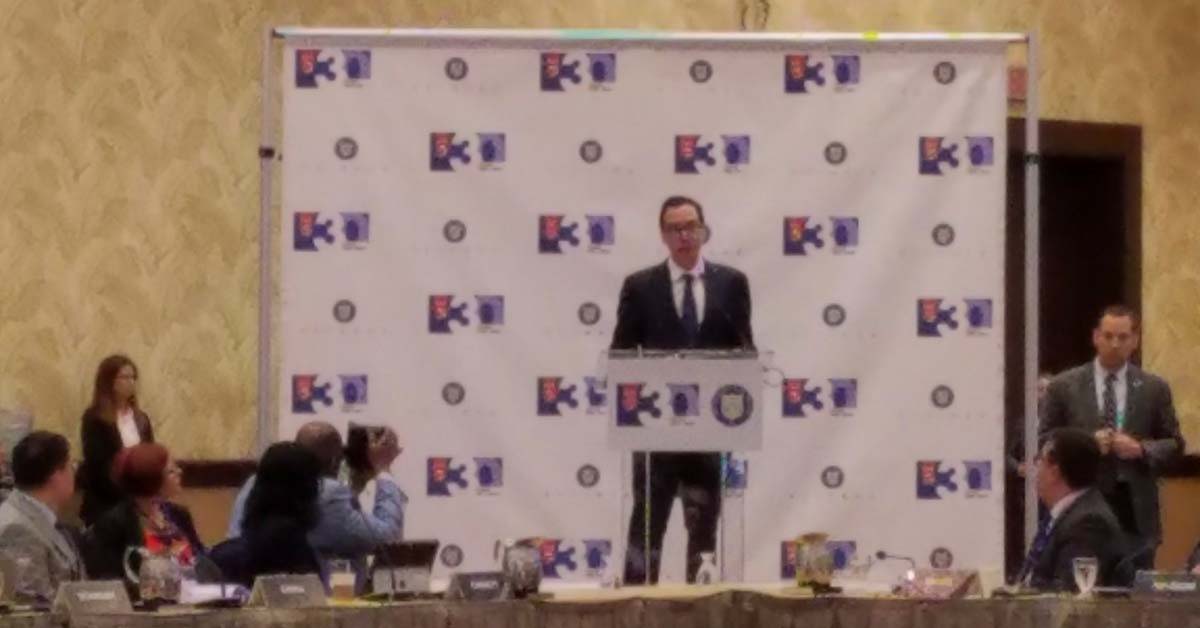 FATF “continues to take concrete steps to combat illicit financing by criminals, terrorists, rogue nations, and other actors who actively attempt to exploit any weak links,” he told a gathering of hundreds of dignities under sparkling chandeliers at the Wyndham Hotel and Resort ballroom on International Drive.

However, the FATF standards and recommendations against fighting money laundering, corruption terror financing and other financial crimes are “only effective if jurisdictions around the world actually take measures to implement them,” Mnuchin said.

“Failure to enforce well-defined consequences for inaction could undermine the credibility of the FATF’s peer review process and of the organization as a whole,” he said.

“The FATF responded to Iran’s willful failure to address its systemic money laundering and terrorist financing deficiencies by requiring increased supervisory examination for branches and subsidiaries of financial institutions based in Iran and calling for additional counter-measures to be re-imposed if Iran does not make further progress.”

He also noted that criminals will always attempt to find the weakest link, exhorting jurisdictions to broadly and aggressively update the financial crime compliance standards up to FATF levels, which in recent years have shifted from a focus on technical compliance with recommendations to effectiveness, meaning concrete, measurable progress in fighting financial crime.

“The United States calls on all nations to join us in ensuring the FATF’s standards are implemented globally, and standing together against those who threaten the security of the international financial system,” Mnuchin said.

Under the U.S. Presidency, he stated the country prioritized three critical areas at FATF:

Here are some of his thoughts on the progress and outcomes on those issues:

One of the most valuable contributions of this plenary is the regulation of all virtual assets, especially cryptocurrencies. I commend efforts by the FATF to address the growing misuse of cryptocurrencies and other virtual assets by money launderers, terrorist financiers, and other illicit actors. I am proud to note that under the co-chairmanship of Spain and Singapore, you have delivered on the ambitious goal of addressing these risks in a number of ways.

The Interpretive Note adopted this week includes virtual asset standards that are binding to all countries. By issuing updated guidance, the FATF is enhancing financial transparency and setting expectations. This will enforce a level playing field for virtual asset service providers, including cryptocurrency providers, and traditional financial institutions.

Under these new measures, virtual asset service providers will be required to implement the same AML/CFT requirements as traditional financial institutions. They will need to:

By adopting the standards and guidelines agreed to this week, the FATF will make sure that virtual asset service providers do not operate in the dark shadows. This will enable the emerging FinTech sector to stay one-step ahead of rogue regimes and sympathizers of illicit causes searching for avenues to raise and transfer funds without detection.

We must work together to ensure that virtual assets are no longer a safe haven for illicit actors to end-run around established AML/CFT safeguards.

The United States welcomes responsible innovation, including new technologies that may improve the efficiency of the financial system and expand access to financial services. Yet we must maintain our financial system’s integrity and protect it from abuse. That is why the United States has in place a comprehensive AML/CFT framework for regulating, supervising, and taking enforcement actions relating to virtual currency and other digital assets.

The United States subjects the same AML/CFT controls to covered providers and activities as any other U.S. financial institution. For example, service providers must register with FinCEN. They must also institute an AML program, and recordkeeping and reporting measures, including filing suspicious activity reports.

COUNTERING THE FINANCING OF TERRORISM

Another U.S. focus during our FATF presidency has been on practical efforts to dismantle terrorist financing networks. I am proud that we are working to train prosecutors and judges to more effectively investigate and prosecute terrorist financing, and that we adopted new guidance on assessing terrorist financing risks. We are moving beyond simply establishing legal frameworks to ensuring that these laws are actually disrupting the financing of terrorist groups.

Finally, under the U.S. Presidency, the FATF examined ways in which the standards could more effectively address the threat of WMD proliferation financing. Rogue nations, terrorists, and international criminal syndicates have become increasingly sophisticated in evading sanctions, and other preventive measures, in order to continue to develop WMDs. I encourage this organization to build upon the work that was done here to ensure that the FATF Global Network’s policies and controls effectively counter this evolving threat.