ACFCS Fincrime Virtual Week 2021 Takeaways: Through the eyes of an attendee – Day one highlights, investigations, cyber and sanctions 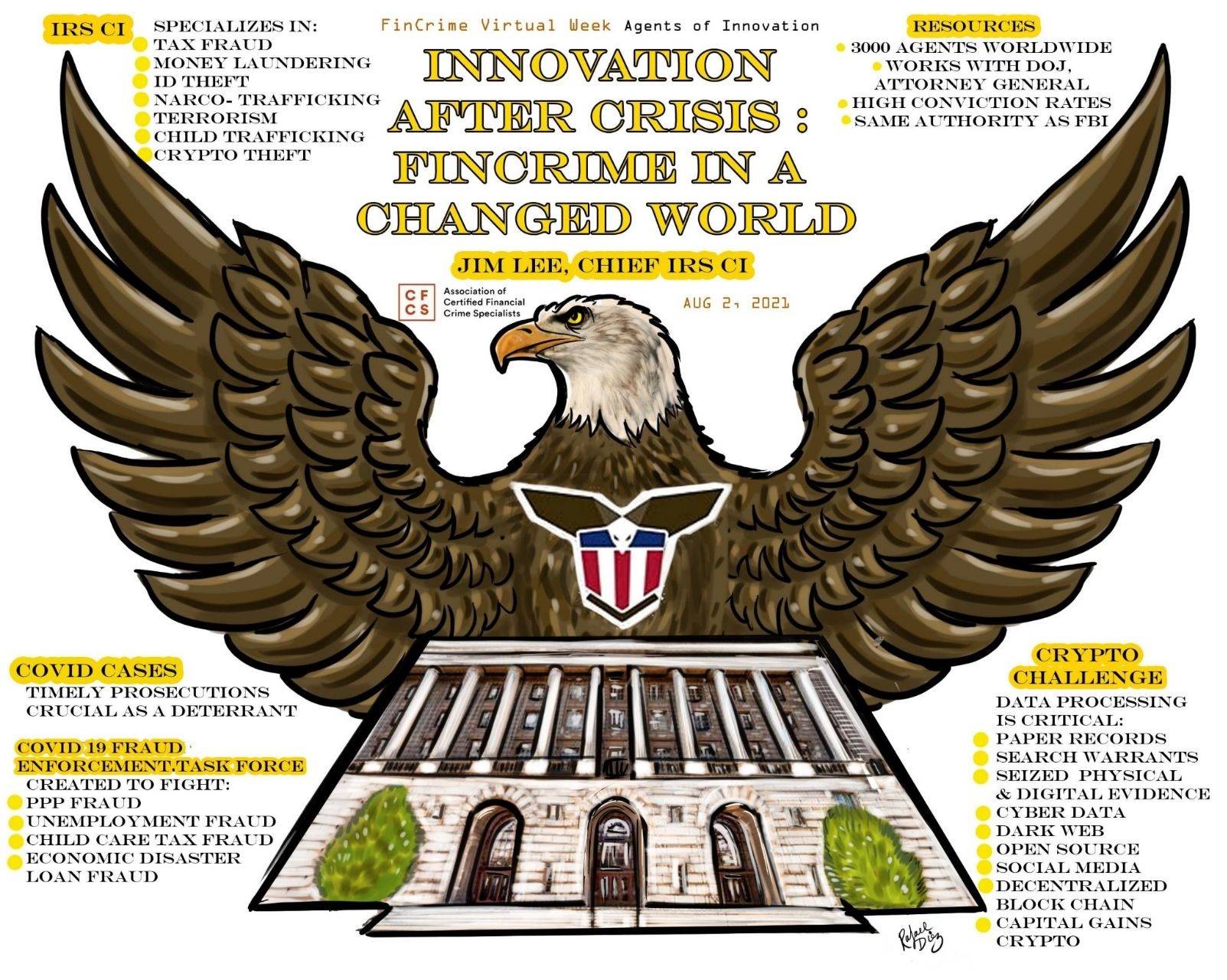 In this series, ACFCS takes a look back at our premier event of the year, Fincrime Virtual Week 2021, with key highlights, takeaways and snapshots of resonance and relevance through the eyes of an attendee: Mehrzaad Mogrelia, a forensic accountant, author, speaker and mentor in India.

Some themes for the first day of the event included better capturing, taming and wielding big data, the importance of technology and training together to sharpen human decision-making and balancing regulatory requirements with crafting deeper intelligence that would be of greater value to law enforcement.

Mogrelia’s deep and detailed accounts and proficient and prolific social posts spoke to his passion for the field of financial crime and compliance and the value and knowledge of the speakers and topics.

Here are some of his thoughts on Day One:

When it comes to the IRS, don’t mess with the best

Day one of the FinCrime Virtual Week put together by Association of Certified Financial Crime Specialists – ACFCS from 2-6 August 2021, got off to a cracking start and setting the tone for the rest of the sessions to come over the course of the next five days.Some of the key highlights/takeaways for me from the various sessions attended on Day 1 are as follows:The Welcome Address and Keynote session started off with a brilliant circus act by the ACFCS team followed by a keynote adress by Mr. Jim Lee, Chief of the Internal Revenue Service, Criminal Investigation (IRS-CI).

The session covered challenges and opportunities in tackling FinCrime by the IRS.

The major challenge highlighted was in the area of processing the data and legally accessing it, as in the case of Crypto Investments.

This was followed by touching upon the various platforms like Dark Web, OSINT, Social Media, etc. that can enable regulators and other enforcement agencies to detect and track down FinCrime.

The agency’s major cases in recent years include taking down child exploitation networks, cyber-enabled terror financiers, pandemic fraudsters and more. IRS-CI also could see that momentum surge with an expected hefty budget bump coming if Congress can agree on the impending Infrastructure package.

Lee also touched on the power, potential and promise of stronger public-private partnerships in the form of a new ACDC, the Advanced Collaboration and Data Center.

This pioneering initiative would create a “centralized hub for cyber training, tools and collaborative efforts for every cyber channel, not just crypto,” including those in government, out in the field, external brain trusts, investigators, national security groups and others to keep pace with rising cyber risks, vulnerabilities and soaring cyber-enabled fraud, like ransomware.

Finally, the session covered the various skillsets and background needed to apply to the IRS along with the training program the team of IRS needs to undergo.

Overall, a pretty exciting session with a lot of takeaways, especially for those looking to apply to the various positions at IRS.

The second session was dedicated to identifying and combating various elements of cybercrime.

It also touched upon the fact that Intelligence Collection is a business problem and the factors influencing it.

Another key aspect was focused around various institutions developing or sourcing cyber threat intelligence, sourcing the Dark Web for data that can provide insights into the bad actors and how to better protect the organizational data.

Finally, the session came to a concluding note around the topic of factors to be considered for building a Cybercrime Program for the organizations which include organizations Priority Intelligence Requirements (PIRs), and collaboration with law enforcement and other agencies to share data and trends, among other factors.

Sanction Evasion has become a hot discussion topic among FinCrime professionals and with the evolution of Sanction Evasion techniques, the efforts to prevent it have only become more critical.

It kicked off with the speakers talking about the vastness of the US Sanctions Program covering areas like oil, gold, among other things.

This was followed by key controls and consideration around Sanctions Evasion techniques like strong know your customer/know your customer’s customer (KYC/KYCC) Programs to identify red flags, Contextual Monitoring to identify bad actors, strong third-party due diligence program, among others.

The session also covered how real estate, both commercial as well as residential, can be used as an effective way of Sanctions Evasion as Real Estate value typically appreciates over a period of time.

Finally, the session concluded on the note of looking forward to the Sanction Evasion landscape and its evolution along with the key factors influencing that.

“The majority, including drugs, occur through land, air and sea. Understanding that is critical. Sanctions activity and trade activity, they are very very interconnected.”

But there are some countries that go out of their way to evade sanctions: like Iran, North Korea and Venezuela.

These are countries where “every resource of the government is set out to evade sanctions. Everyone who is supposed to stop this is an active participant,” Kumar said. 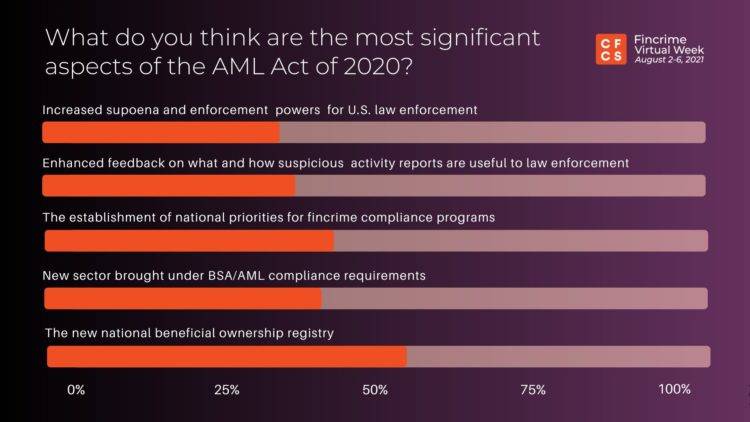 The AML Act of 2020 is a revolution in regulation of Financial Crime compliance programs in the US.

The session started off by discussing the changes the AML Act would bring to the Bank Secrecy Act.

A change to the Suspicious Activity Report (SAR) filing regime is by far the largest piece of the AML Act.

Banks and other entities subject to AML rules file millions of SARs each year and the intelligence they provide to the Government can form the foundation of new cases or strengthen ongoing investigations.

One powerful element of the AML Act, however, would be feedback to corporates on SAR filing procedures, the quality of individual filings, and broader trends that could help institutions directly or regionally, which many consider to be the biggest game changer.

While SAR filings have helped the government in financial crime cases across the spectrum, what has been lacked for years – and what the U.S. upgrade seeks to address – is the lack of feedback to banks on what SARs were useful, what ones were not, and why, an effort that would help institutions take a more tactical, strategic approach to filing.

At the heart of the act is also a push for broader public-private partnerships, with banks, federal investigators and regulators working together to improve programs, processes and results – focusing on the highest risk entities, criminal organizations or terror groups, in this instance guided by the government releasing National AML Priorities.

The National Priorities highlighted need to be consistent with the AML Act and certain new priorities like Foreign and Domestic Terrorist Financing, Proliferation Financing, Human Trafficking and Smuggling, etc. were announced by FinCen.

Several other risk areas like Antiquities, Crypto were also identified.

The FinCEN priorities, likely familiar drumbeats to large, international banks, are still given more weight and attention as they stand front and center at the new countercrime vanguard, the tip of the spear for fincrime fighters, not buried in dense and didactic reports, such as the Treasury’s 2020 Illicit Finance Strategy, the 2018 National Risk Assessment and others.

But how does a bank measure fincrime compliance program effectiveness?

Coinciding with and underpinning the release of FinCEN’s AML priorities, the Wolfsberg Group issued a critical missive to detail in practical, tactical steps how financial institutions can actually demonstrate effectiveness.

What is, and is not, “effective” has been a flashpoint issue in recent years as investigators, regulators and global watchdog groups shoot it from the mountaintops, but have been less vociferous about anything in the way of bright-line, auditable boundaries.

That has changed recently with Wolfsberg publishing what it considers tangible, measurable metrics of effectiveness, including:

To read the full statement by Wolfsberg Group, an influential alliance of more than a dozen of the world’s largest banks, including Citi, JPMorgan, Barclays, Credit Suisse and others, click here.

Taken together, the priorities and metrics of effectiveness give a glimpse of the future of fighting financial crime.

A brighter tomorrow where “effective” compliance teams generate “highly useful” and “relevant” intelligence for investigators in focused, shifting defined “priority areas,” both broad generators of illicit income, like corruption and cyber-enabled fraud, but also attuned to the actions and reactions of international threat actor groups.

Lastly, a core component of the AMLA, The Corporate Transparency Act, needs to be revisited as a statute, mainly due to the exemptions to the exceptions and lack of availability of a public database of Beneficial Owners, speakers said.

The database can only be accessed with the permission of the reporting company, thereby adversely impacting Financial Institutions as they won’t have access to double check whatever a corporate tells them now under current rules, which put the pressure on the banks to ask the questions and engage in a veracity and accuracy exercise.

Music is the best way to unwind after a long day and what better way to sign off than with some good Jazz Music and a Fireside chat with Carole House from the White House National Security on the issue of cybersecurity threats.